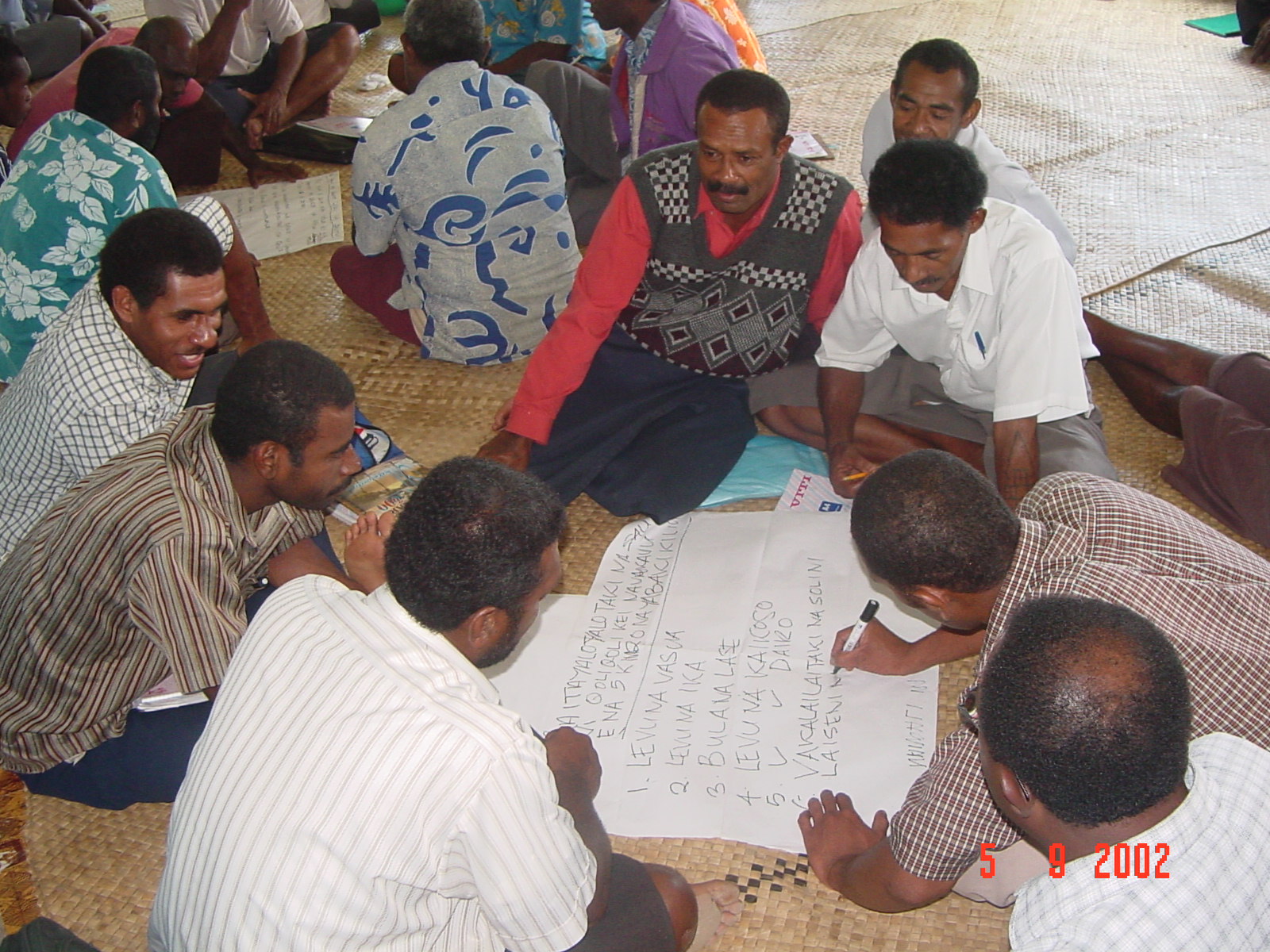 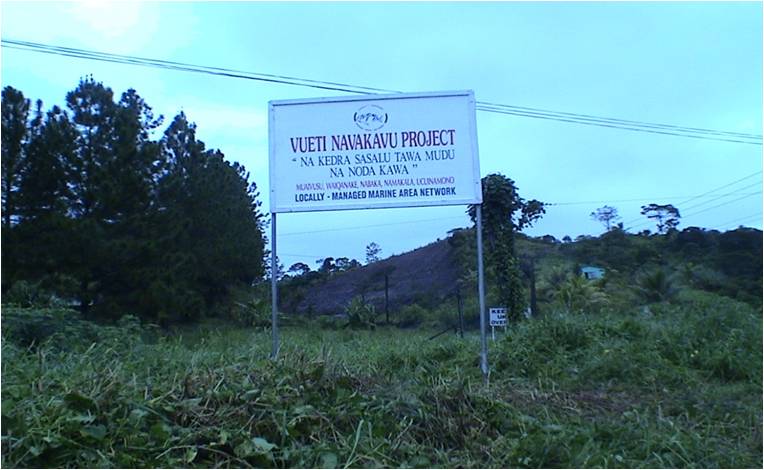 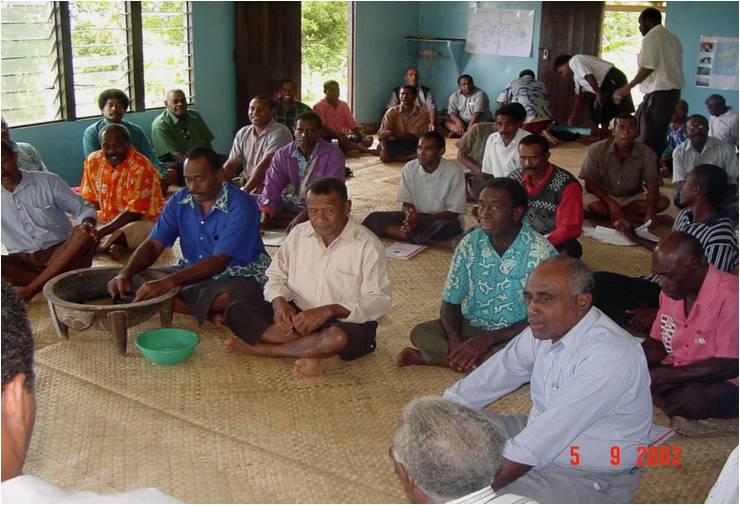 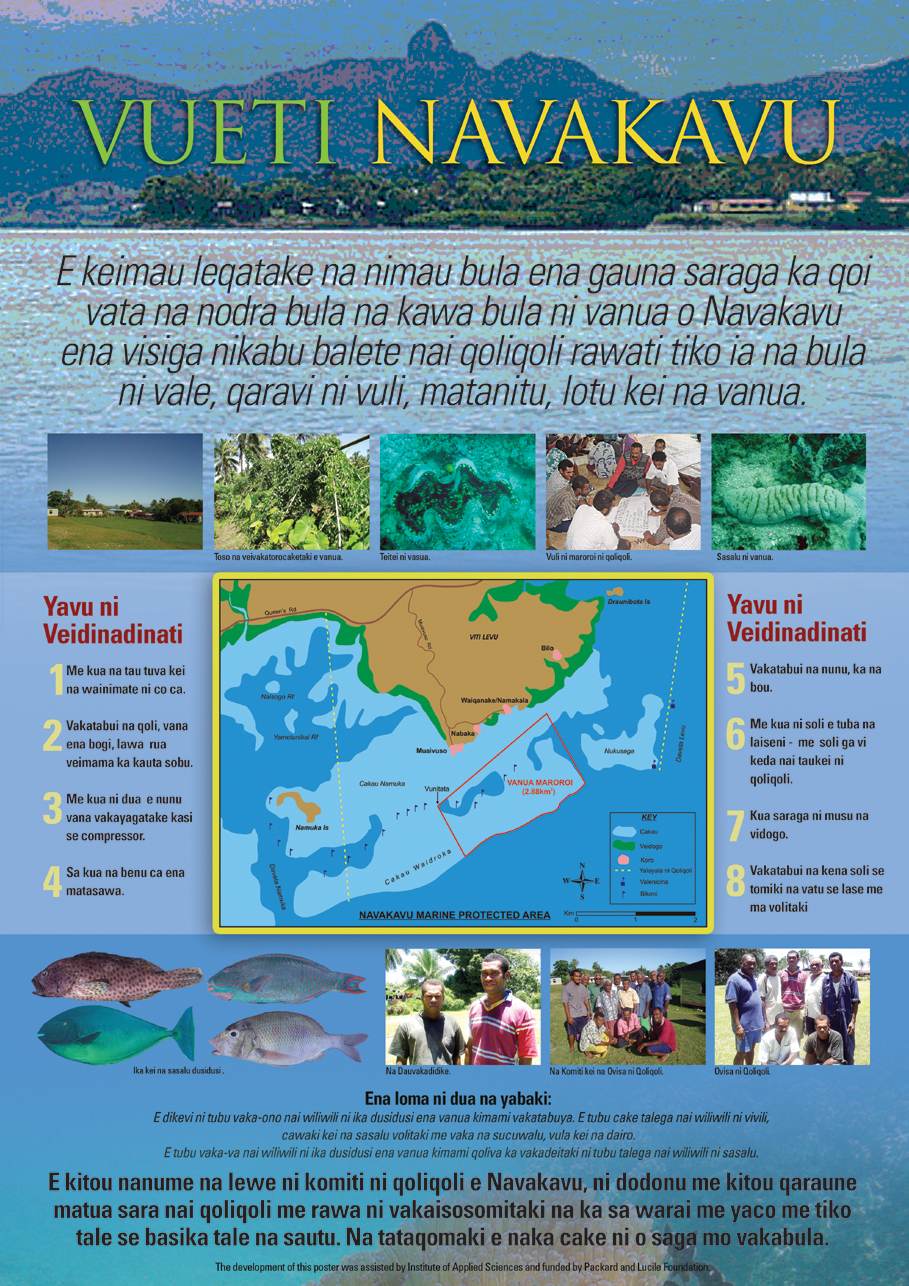 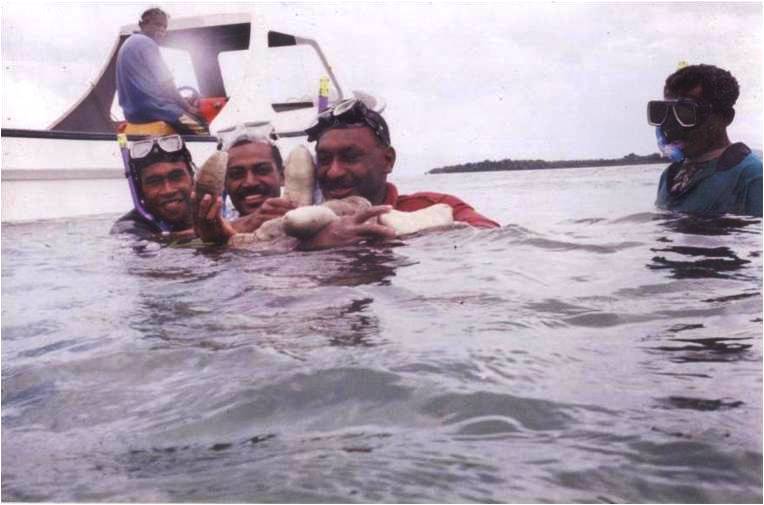 The locally managed marine area (LMMA) of Vueti Navakavu is located on Fiji's main island of Viti Levu, approximately 13km west from the capital city of Suva, on the Muaivusu Peninsula. Designated in 2002, the marine area is managed by the clan (yavusa) of Navakavu that totals about 600 people and comprises three villages, namely Muaivusu, Nabaka, Waiqanake, and two settlements, Namakala and Ucuinamono. The area is a traditional fishing ground or customary fishing rights area, which are known locally as qoliqoli, and covers 19.1km2. Within this area is the marine reserve, a no-take zone, of 3.8km2, which comprises about 20% of the total qoliqoli area. The main habitat types are submerged and barrier coral reefs, mudflats, seagrass and algal beds, mangroves, macroalgal and rubble areas and a blue-hole lagoon. Fishing is the major source of income in the area, although some revenue is also generated through agriculture.

In the 1990s it became clear that the sustainability and fish population levels within the qoliqoli of Navakavu were of concern. The community approached the Institute for Applied Science (IAS) at the University for the South Pacific, who were already conducting field studies in the area, and the Fiji Locally Managed Marine Areas Network (FLMMA) for assistance. Surveys and workshops with the community revealed numerous threats to the area: 4

1.Overfishing and illegal poaching causing the decline of finfish, invertebrate and seaweed species

3.Destruction and bleaching of coral reefs

6.Sedimentation of reefs and lagoons, and loss of beaches and shoreline vegetation, through coastal erosion

7.Loss of traditional knowledge and practices that have formally maintained the area

8.Lack of awareness on conservation and sustainable issues

Due to their interest the community designated their first MPA in 2001. The IAS coordinated a community-based marine resource management and sustainability workshop and a management planning workshop in 2002. As a result the community formally established the marine protected area (vanua maroroi) in January 2002 as a no-take zone for the next 2 years, and developed a resource management plan, with the aid of the IAS and FLMMA. In 2004 the area was initially opened up to fishing, but the no-take zone was quickly re-established.5 The MPA is now a permanent reserve, which was initiated by the community and later declared through the defined cultural protocol systems. The site name Vueti Navakavu literally translates to “lifting/reviving" Navukavu. The community's vision is to improve the management and protection of their marine area to provide a healthy and vibrant ecosystem that will support abundant and diverse marine life for food source and secured income sources.

The MPA area covers the back reef and the blue-hole lagoonal area with heterogeneous structured habitat types, although the boundary does not extend right to shore. All marine life (edible and non-edible fishes, commercial fish and invertebrate species) in the MPA is conserved. Rare species, mostly those in the upper trophic levels, were identified during the early stage of the project including unicornfish, bumphead parrotfish, barracudas, sharks, turtles and diminishing edible and commercial invertebrate species. The community are fully aware of the value of certain marine species, which are a major component of their traditions and cultural identity and their connectivity with other communities. As these important species are either becoming rare or phasing out this would mean the widening of the cultural gap of the future people of the community.

The blue-hole area is a unique habitat harboring a wide range of fish species across all trophic levels and including various invertebrate species. The blue hole provides breeding and spawning areas, a bleaching resistance zone and fishing restrictions. The MPA has clearly stabilised coral reefs. There are also significant differences in the fish biomass in MPA compared to the harvest area, and likewise food fishes biomass are significantly greater in MPA than adjacent areas.

“Before, a pot of fish was not enough to cater for a family's nutritional needs but at present after the establishment of the MPA, a catch of only 3 fish is enough to feed a nuclear family".

Estimates suggest that finfish catches have increased by approximately 3% each year since the establishment of the reserve, and that invertebrate populations have increased too.5 In particular there have been increases in both the kabatias (Lethrinus harak, L. obsoletus, L. lentjan) and the sabutus (Lethrinus atkinsoni) fish.6 The area provides a significant percentage of fish and other marine foodstuffs to markets on the island. Hence the catch effort has decreased and the income of the fishermen in the local community has increased, and is expected to continue to increase over time as fish populations continue to grow due to the marine protected area.

“The marine environment is our source of income and sustenance; our form of long term investment; future generations will benefit from such an initiative."

“The MPA is like a bank to the people".

The Coral Reefs in the South Pacific (CRISP) project, is assisting with the assessment and GIS mapping of the habitat, and is currently testing the restocking of post-larval coral reef fish species to the qoliqoli. The project has also associated with work on documenting all the finfish species present within the area, and their traditional names in the Navakavu language.4

“The MPA has not only helped the researchers achieve their study goals but has also helped the villagers understand and appreciate their marine environment more."

The area is managed by the seven sub-clans (mataqali) that inhabit the village communities and form the Yavusa Navakavu clan. The Bose Vanua* endorsed the MPA recommendation from community and created a Qoliqoli Committee to increase awareness, the management of the sustainable use of natural resources, the conservation of fisheries and the enforcement of the no-take area. The Committee is formed of representatives from all the 7 matatqali as well as community biological monitors, fish wardens and other community members.3 All the decisions reached by the Committee are after consultations with the wider community. The MPA boundaries are patrolled by fish warden nominated from the village councils. The duty of the fish wardens is to collect evidence of illegal entry into MPAs, such as the confiscation of fishing gear by poachers, and report to the police.

The reserve is not formally designated or gazetted under national law, and as such does not have formal recognition under Fijian laws that can be enforced by the local community. The community-based marine protected area is supported though by the national government's legal framework for “customary fishing rights areas" within the Fiji Fisheries Act. However the national Fisheries Act (1991) in Fiji still allows the harvesting of resources with hand nets, wading nets, spears or line and hook fishing by non-commercial harvesters in any area, even if this is marine protected area.1 If formally recognized, the Fisheries Act would at least require that both non-commercial and commercial harvesters obtain a permit from the customary owners of the qoliqoli in order to carry out fishing activities.

Enforcement of the management plan and prohibiting fishing within the no-take zone remains problematic, even though the community has provided considerable support and investment. The management committee and fish wardens recognize that illegal fishing, through poaching and night dive spear fishing, is the main problem threatening the reserve.

“Because of the richness and the health of marine environment, organisms and/or life have tempted some community members to breach the agreement that once was firmly established about the MPA".

Fish wardens, who are local community members, can sometimes be too lenient as they are inter-related to everyone in the community, although this is not a particular problem, and the wardens still perform their duties well.

“It's not that the fish wardens are not carrying out their assigned jobs but due to the fact these are people who are next of kin (blood ties amongst the group) they prefer to let the issue pass."